The Ombudsman for Short-Term Insurance (OSTI) Tuesday released her report for the 2016 calendar year.

The Ombudsman for Short-Term Insurance is an independent body to which short-term insurance clients can send complaints if they feel that their claim was not treated fairly.

In the report, the Ombudsman tabulates certain statistics per individual insurer. Two key indicators are highlighted which offer the best representation regarding how fairly each insurer handled their claims for the period. Firstly, the referral rate shows the number of complaints submitted to the Ombudsman, per 1,000 claims received by the insurer. This is a good indicator of the frequency at which clients complain about a specific insurer. Secondly, the overturn rate indicates the proportion of those complaints that were overturned by the OSTI, with some benefit given to the complainant. This metric best indicates the accuracy of the insurer’s decision regarding the claim.

Looking at the results for all the major short-term insurance companies, it is clear that OUTsurance has once again beaten the industry averages for both of these key indicators. Furthermore, when one calculates the number of complaints overturned by the Ombudsman as a proportion of the total claims handled by that insurer, a more complete picture emerges regarding how fairly that insurer treated its clients when claiming.

Willem Roos, Group CEO of OUTsurance confirms that ‘By combining the referral and overturned rates, OUTsurance once again came out tops by achieving an overturn rate of only 1.7 claims per 10,000 claims processed. That’s the third year in a row of improvement and it’s the third time that we’ve managed to do better than all our major competitors. We have an amazing claims team to thank for that. They are truly committed and passionate about giving our clients the best and fairest service possible. They are truly committed to our value of awesome service.’

‘We are thrilled with the results of the 2016 report. The results clearly show that we’re looking at the merit of a claim, rather than just reviewing claims according to our underwriting and contractual position,’ says Burton Naicker, Chief Operating Officer at OUTsurance.

‘When processing claims, we always try to put ourselves in the client’s position and to take the time to consider how our decision will impact the client. We want to prove to our clients that when we say that they always get something out, that we really mean it.’ 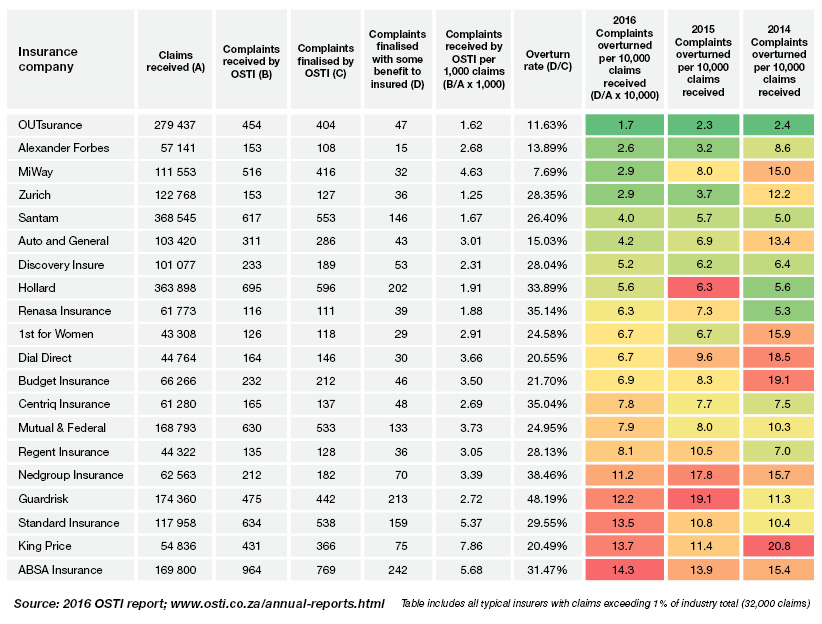 Done
Get a quote for my
We use cookies

We use cookies to optimise the user experience. Tell me more